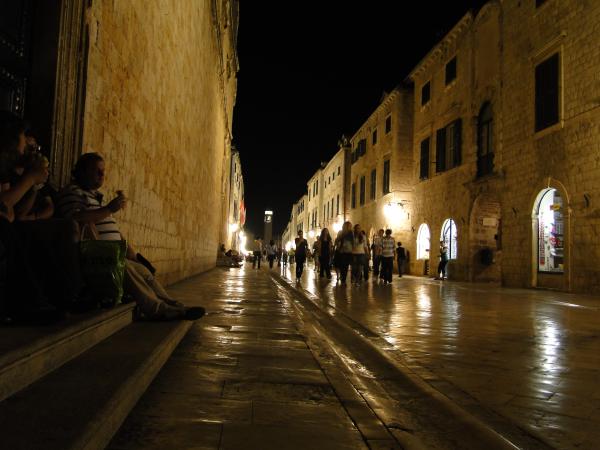 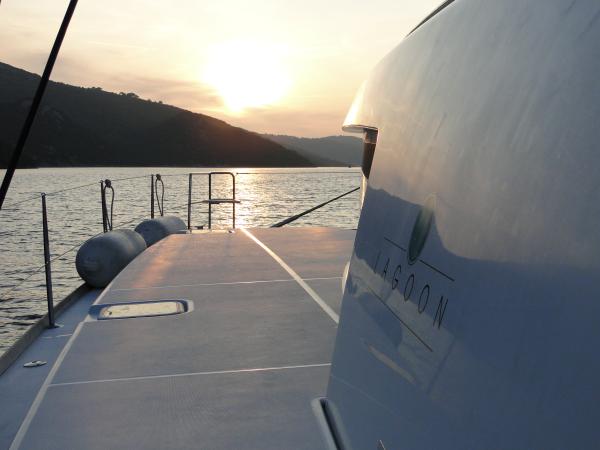 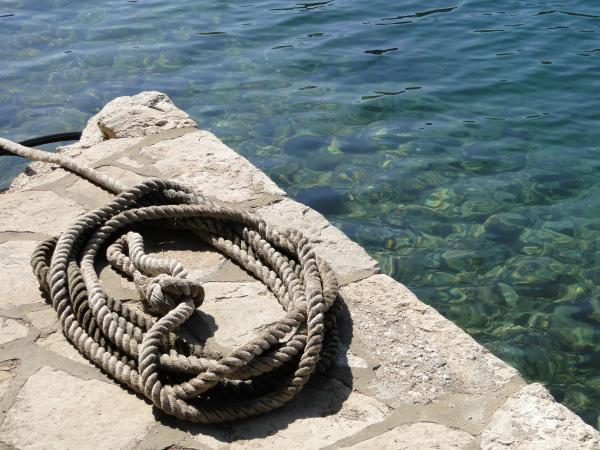 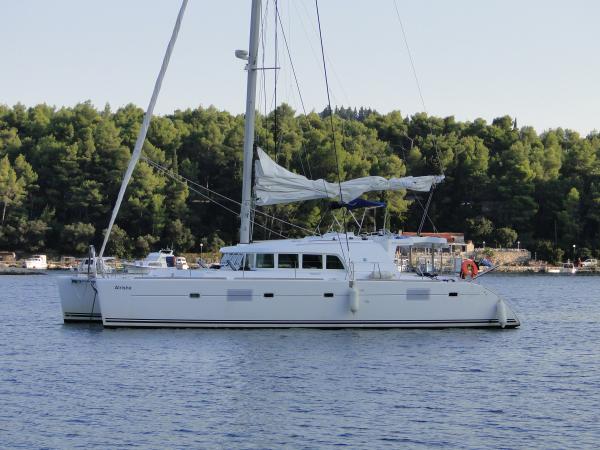 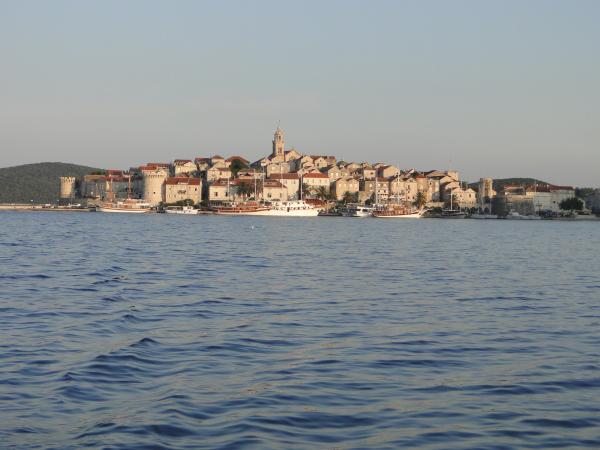 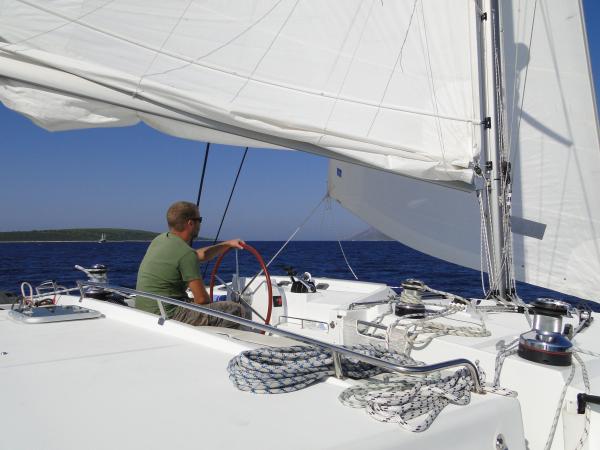 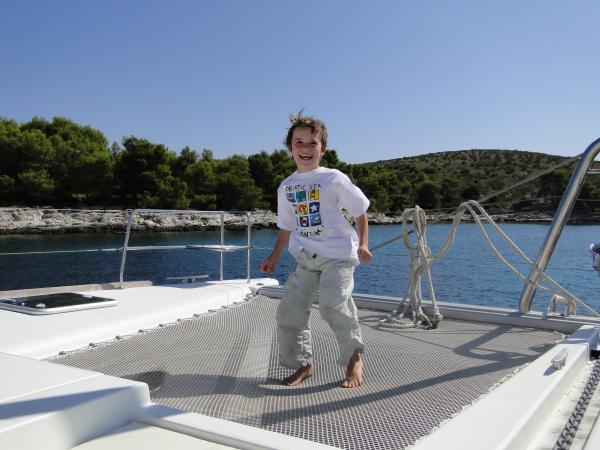 I had really been looking forwards to this trip. Croatia has always been one of my favourite sailing venues and this time we would be exploring a part that I had not been to before. Not only that but we would be sailing a type of yacht that I have not sailed before.

I have sailed small, fast catamarans such as the Dart 18 before but never a multihull yacht. I suppose I had not thought of it as real sailing, considering them to be slow, lumbering beasts that could not sail to windward. With the world's fastest yachts (e.g. Banque Populaire) having multiple hulls I was intrigued to see if my misgivings about them had any basis by checking how they performed.

I can now say with hand on heart that these boats are real sailing yachts, albeit with different priorities. My first thought upon stepping aboard our Lagoon 500 was that I could easily get used to this type of sailing. The large, light cabins with ample storage make for a very comfortable environment. Add to that the vast saloon with very well equipped galley (including domestic sized oven, hobs, microwave and dishwasher), the large outside dining area and the huge amounts of deck space and large flybridge and this has the makings of a luxury boat for all the family (or families!).

A yacht such as this solves two age old chartering quandaries:

Will the wife enjoy the trip?
My wife would have a much more enjoyable trip on this yacht than a monohull because of the extra space but mainly because it would not trigger a case of what I refer to as heelaphobia1. Even when under sail the cat barely heels. The only time when she was not much more stable than a monohull was when she rocked over waves.

Who gets the master cabin?
With two fifty foot long hulls with a separate saloon bridging them a typical Lagoon 5002 has four large double cabins for the guests each with a large amount of storage space and ensuite heads/shower facilities. This means that nobody in your charter party will draw the short straw and end up in a cramped cabin. In addition there are often two single "grave" berths for the skipper and hostess in the bows, meaning that you do not have to sacrifice any of the double cabins.

Another seemingly small, yet important, quality of the catamaran was that the design lends itself to having davits for a small RIB which is slung over the stern ready to go ashore at a moment's notice. To my mind this seems to make more sense than giving up valuable space in the stern of the yacht for a RIB garage.

I had flown to Croatia's southernmost city, Dubrovnik, to begin our passage. Arriving in Dubrovnik in the evening was a very special experience. The current old town was built after the earthquake in 1667 which levelled most of the buildings. The 2km long city wall (which is up to 6m thick in places) and the carefully planned "Stradun" main street make it a very beautiful city.

The plan was to sail north to Primosten, exploring the many large islands that we passed on the way. This journey is ideal for a week long one-way charter.

On our way north we stopped at some beautiful towns and bays. There are generally more private marinas in the south of Croatia than in the north because the planning regulations are less strict. This makes it easier to find a berth in peak season. Throughout the entire journey I was constantly aware of how clean everywhere was and especially of how pure the sea is.

Our first stop was on the quay of the small town of Polace on the island of Mljet where we had a nice meal and spent the night. This put us in a great position to visit the Mljet National Park. The entry fee includes transport into the park by mini bus and a trip across the lake to the 12th century Benedictine monastery.

From Polace it is only 15nm NW to Korcula Town (were the locals argue that Marco Polo originates) which is well worth stopping off in for a few hours. If the weather is favourable then the bay at the West end of Poluotok Peljesac makes for a pleasant mooring.

We continued our passage northwestwards by putting in another 25nm to Hvar Town. Hvar appeared to be more vibrant and opulent than Korcula and many venues (such as Carpe Diem or a secret offshore club) are certainly exclusive. It is possible to anchor at the town although it is invariably busy.

The Pekleni islands, to the west of Hvar, provide a wealth of bays to anchor in for a bite to eat and a swim.

We chose to spend the night on a restaurant mooring in Milna to the east of Hvar. The atmosphere in "Kotin" was very special as we dined at the waterside as the sun set behind Hvar island on the other side of the bay.

From here many people head off to visit the famous blue cave on the island of Vis. We continued up to Solta island and to the very convenient, beautiful and busy Drvenik V for yet another relaxing swim in the beautifully clear water.

I like to sail in the Adriatic before or after the summer months (i.e. May or September) because the climate is cooler (about 25 degrees centigrade) and the waters are less crowded. The prime time to avoid are the weeks either side of the Italian holy day of Ferragosto which is mid-August. At this time it is a lot more difficult to find moorings, berth and restaurant places. The historic towns are also jam packed and the streets are far noisier.

If I was forced to choose between May and September I would plump for September because the water is warmer (about 24 degrees centigrade). You may however find that by that time in the season one or two things on charter yachts are in need of repair. This is of course another reason to have a skipper aboard who can take care of those things, calling ahead to base if need be to arrange expedient replacements.

The climate in the south of the Adriatic suits this type of holiday nicely. There is less rain and the winds tend to be lower because the sudden NE bora winds are less. The sudden navera gusts that are experienced throughout the Adriatic are less marked than further north. In place of the bora is the SE sirocco wind (known locally as "jugo") which is warmer and more constant.

Perhaps one of the nicest things about being on a luxury yacht in the Adriatic is the ability to pick up a restaurant's mooring or come alongside their quay for a tasty meal. Croatian cooking may not be everyone's idea of luxury catering because the range is limited (most restaurants have identical menus) and the flavour is basic. If, like me, you appreciate large portions and unadulterated quality ingredients then you should find the food very pleasing, especially when it has been cooked on an open grill or a sealed "peco" (similar to a covered South African braai).

In my view it is a good idea to spend as many nights eating out as possible because it can work out cheaper than the combined cost of grocery shopping and marina fees, not to mention saving the hassle of cooking!

If you like organic food and are happy to have only a small menu to choose from then you may like to visit one of the agritourism restaurants on Korcula island ("Zure" in Lumbarda and "Mate" in Bupat are two of the skipper's favourites). These restaurants only use the ingredients that they produce themselves or source locally. If you would like a list of recommended restaurants in Croatia then A2A Yachting can provide you with a useful list.

The trip was arranged by A2A Yachting which has offices in the UK and Croatia. Their staff were efficient in helping arrange the holiday.


1. The aversion to even slight amounts of heeling motion of a yacht bringing on visions of impending doom.
2. Cabin layouts vary between different versions of the model.
-